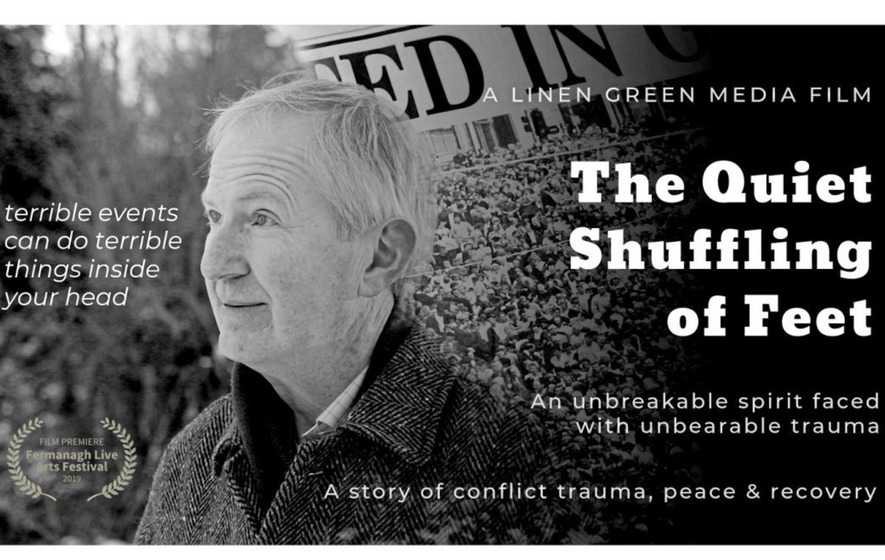 A documentary about an unbreakable spirit faced with unbearable trauma. A second responder’s story about conflict trauma, recovery and peace making.

David Bolton, former Director of the Northern Ireland Centre for Trauma and Transformation, is retired and beekeeping in rural Fermanagh. Shy by nature, as a second responder David found himself at the heart of the community response to two of the most violent events of “the Troubles.” To this day the Enniskillen and Omagh bombings remind us of the futility of violence, and the grief, suffering and loss experienced by so many. This feature length documentary explores one man’s search for answers to conflict related trauma. A very personal portrait of a remarkable humanitarian.

Produced and directed by Fergus Cooper. Growing up in East Belfast in the 1970s and a background in youthwork drew Fergus to tell this story and with family connections to North Leitrim, Fergus is delighted the Irish premiere of The Quiet Shuffling of Feet is in Manorhamilton.

The film screening will be followed by a Q&A/Discussion with David Bolton, Fergus Cooper opened and introduced by Gerry Farrell (Psychotherapist and Playwright). This event is a part of the ‘Across the Lines’ peace-building programme at The Glens Centre, supported by the International Fund for Ireland.

It is by any measurement a powerful film which has a sorrow to it but also a softness or sense of inner gentleness.
The Irish News

The film is a different way of reminding people not to be complacent about the peace process, that there is a huge legacy issue here and that this will go on for generations.
The Irish Times

An important film, with many important and powerful messages about the traumatic experiences of conflict, featuring one man’s dignified role in supporting many of those affected.
The Impartial Reporter