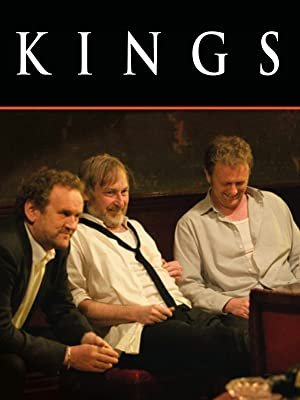 Director Tommy Collins, who recently passed away, directs an important milestone in the development of Irish language cinema. Kings is adapted from Jimmy Murphy’s celebrated stage play Kings of the Kilburn High Road, a story set among London’s exile Conamara community of navvies.
Playwright Jimmy Murphy and lead actor Donal O’Kelly will participate in a post-screening discussion.
Tom Collins (1950-2022) passed away in July leaving a significant body of work. He grew up in Derry’s Bogside and like many people of his generation he became politically active in his teens. He was then part of a proactive movement in Derry in the mid 1980s to move beyond conflict and the marginalisation of his community, becoming a founding member of Derry Film and Video. He produced Hush-a-Bye (1989), Margo Harkin’s debut feature film and The Bishop’s Story (directed by the ground-breaking Irish language director Bob Quinn) before embarking on a prolific directing career including Bogwoman (1997), closely based on his mother’s life-journey from Urris in Donegal to Derry; Teenage Kicks told the story of Derry band The Undertones. We are delighted to screen Kings, the work of which he was most proud.