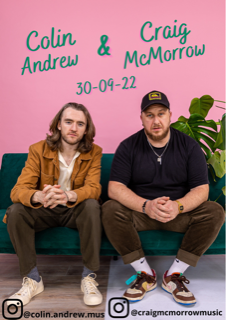 Kerryman Colin Andrew has been honing his alt-pop style through live performance, international residencies and TV appearances since 2012. The singer-songwriter has roots in indie, folk and traditional Irish music, which inform his distinct sound and honest lyrics. Andrew’s captivating, high-energy performances guarantee his audiences a show that blends tradition, musicianship and creativity.
After over a decade of live performance, Andrew has earned his reputation as a diligent and committed artist. Two years in residency at Raglan Road, Disney World allowed him to celebrate his Irish music roots. This led to him making his live TV debut on Ceiliúradh na Féile Pádraig ’(TG4 and BBC 2) alongside The High Kings and Daniel O Donnell. Off the back of his success, Andrew counts national radio play from Radio Kerry, RedFM, and KCLR on his growing list of achievements.
Following the acclaim of his highly anticipated debut single Too Far from Kind in 2019, Andrew released One Night which featured in Spotify’s A Breath of Fresh Eire playlist. He teams his releases with innovative music videos and his last single, Too Far from Kind, was no exception. This impactful work established Andrew as one of Ireland’s most capable and hard-working contemporary musicians.
A striking presence on the Edinburgh music scene, Andrew has now set his focus on his upcoming EP, which promises his most personal and engaging work to date. The forthcoming release will reward his audience with frank lyrics and well-crafted melodies. This distinctive body of work clearly demonstrates the evolution of Andrew’s style; the maturity of his work teamed with his extensive performance portfolio has cemented his reputation as a staple of the alternative music scene.
‘Through years of live performances, the Kerryman has successfully built up a reputation for emotional, powerful musicianship with the ability to make you feel as if every line he is singing is telling your story. ’- Covert Music Club

Leitrim born, Leitrim heart, Edinburgh-based musician Craig McMorrow has released two tracks in the past year ‘Home’ and ‘These Times’. Taking inspiration from a multitude of genres, Craig’s latest song is an example of perfectly-blended emotive pop. ‘These Times’ debuts a new sound for Craig, with flavours of pop and electronic music matching country-esque vocals. The single – which follows up Craig’s debut ‘Home’ – was written and produced over Zoom during lockdown and introduces the softness of an acoustic guitar with the weave of electronica and rhythmic melodies.
The singer-songwriter grew up surrounded by music, from the traditional Irish music loved by his parents, to afternoons spent listening to Frank Sinatra and the Four Tops with his grandad. This mix of influences and a love of music instilled from an early age has led to These Times.
Craig says: “Many many artists have pushed me in the direction of songwriting, starting with the fantastic Damien Rice, Dave Grohl, and most recently Dermott Kennedy and Chris Stapleton.”