To get to the heart of TURF, the performance, you must witness it in real time. A truly unique piece of theatre in every sense of the word, to fully understand it and appreciate it, you must experience it. Any one will tell you that working in the bog requires patience, “and more patience”. It’s a mantra we could all do well and adopt in our lives that have become busy and chaotic. TURF invites the audience on an investigative journey, punctuated with provocative, fiercely athletic and beautifully detailed movement. Situated somewhere deep within the Irish soul, it tells the story of one life, but many selves. TURF reaches out to the experienced turf-cutters among us (and there are many) and to people who have never stepped foot in a bog and who wouldn’t know one end of slane from another. The show appeals to seasoned theatre-goers and to non-theatre goers, interested in the topic, we encourage you to take a risk and see this show.

Performances have been enriched by audience members sharing their own real-life experiences with us after performances. Turf is at the heart of our culture, from the small family owned banks to larger commercial producers, and all of this is on the cusp of dramatic changes. This makes TURF, the performance all the more poignant, and a very timely piece of theatre to bear witness to.

TURF searches for the truth hidden in a fractured landscape and explores not how to hold the TURF but how the TURF takes a hold of you.

TURF brings together the creative forces of Longford based actor and theatre performer Frank Farrell with Yorkshire based director Rowan Tolley (rowantolley), and produced by Michelle Cahill (May Day Creates). The striking image we use on our publicity material was created by Yorkshire based visual artist David Carney. 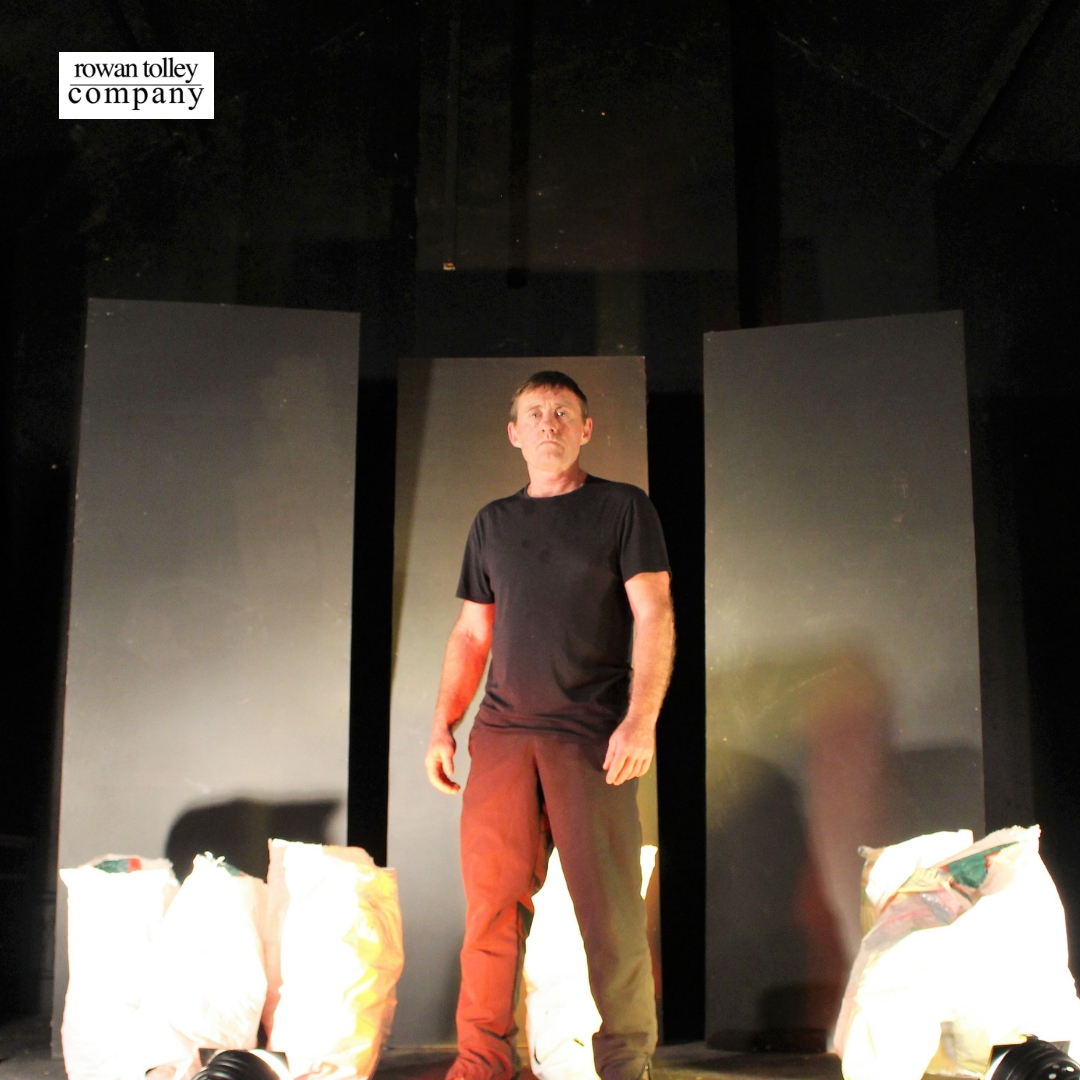 Frank Farrell is a Longford based actor and physical performer. His work extends across traditional theatre, physical-movement theatre, site specific theatre and film. Frank holds a BA (Hons) Degree in Performing Arts from Sligo IT. After graduation, Frank was a founding member of Engage Longford, an artists led platform to promote Longford as a hub for contemporary visual art. Recent work includes the short film Jamsey’s Gone Lakes directed by Shane Crossan (Crooked Line Films) commissioned by County Longford Arts Office and he will appear in Further Theatre’s production of Tilsonbourg at Backstage Theatre this month.

Rowan Tolley is Yorkshire based, and has been classed as one of Britain’s most original and imaginative white face mimes. Influenced by Chaplin, Keaton, Tati and Beckett and building on a training of Decroux technique, he studied in London and Paris, creating a style that has been described as “Classical with touch of the unexpected”. Rowan combines touring his one-man show extensively throughout Britain and Europe with teaching, working in Film and Television, choreographic commissions and directing. He is an accomplished musician and percussionist. Increasingly interested in the function of silence, he is a great believer in the element of risk for both performer and director.

Michelle Cahill, producer, is originally from Galway, and now a Dublin based performer and producer. She studied dance and performance in Yorkshire and London. She has worked with the Rowan Tolley Company for several years. She works with several independent Irish dance and theatre artists and has produced work programmed at Galway Theatre Festival, Dublin Theatre Festival, Dublin Fringe Festival, Dublin Dance Festival, New York International Fringe, Cruthú Arts Festival, and RUA RED Galleries, most recently working with Junk Ensemble’s National tour of the award-winning Soldier Still. Michelle is the programme coordinator at Shawbrook, a residential studio space for dance in the Irish midlands. Her first solo performance Thirteen Steps to the Attic, a creative collaboration with Rowan Tolley premiered at Firkin Crane, Cork and Galway Theatre Festival 2018, and will run at Smock Alley Theatre in February 2019.