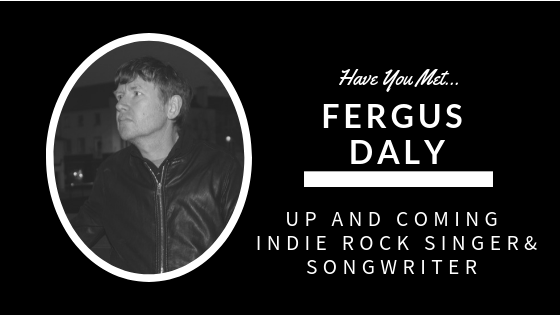 Fergus Daly is an up-and-coming, Irish indie-rock artist who is launching his debut album in The Glens Centre on the 10th of November.

Have you always wanted to be a musician?

Yes, pretty much … As a boy (I was in the Artane Boys Band), my dream was always to be performing on stage … But then life took me in another (more sensible) direction, even though music still raced through my veins every day. Then, a couple of years ago, something happened in my personal life … Which shook me to the core … Caused all these songs to start pouring out … Reawakened my musical aspirations.

What or who inspires your music?
Mostly personal relationships and experiences, I guess, but also current affairs and geo-politics. Although I try to avoid making a song overtly political in nature, this can act as an initial inspiration.

If you had to pick three songs to listen to for all of eternity, what three would they be and why?
I love so many artists, bands, musical genres, this is a tough one! But with a gun to my head, I’d have to go with Don’t Look Back in Anger by Oasis, Photograph by Ed Sheeran, and Rain Song by Led Zeppelin, in no particular order. Zeppelin blew my teenage mind and would be my go to band when feeling all sorts of complex emotions. Oasis, but in particular that song brings me back to a happy-go-lucky time in my life, which I often pine for. Although often slated by other musicians, I think Ed Sheeran has produced some of the best music in the last decade, but this song in particular resonates with me.

What was it like working on your debut album?
An amazing, if daunting experience! I’d no idea what I was getting myself into or how much work would be involve and just as well … But seriously, I genuinely loved every single minute … It’s so rewarding … Bringing a chord progression and lyric scribbled on a piece of paper to the point where it’s professionally recorded, produced, mixed and mastered!

What are you music plans after this?
Funny you should ask … I was just chatting to my friend, Stuart Gray from Jealoustown Studios (producer on the album) about being eager to get back into the studio to record some new material I’m excited about … I mean we’ll see where the dust settles after this album is released, but all going well, I think I’d like to follow-up with am EP in the latter half of 2019, God willing.

Catch the fabulous Fergus Daly on the 10th of November! A performance not to be missed!