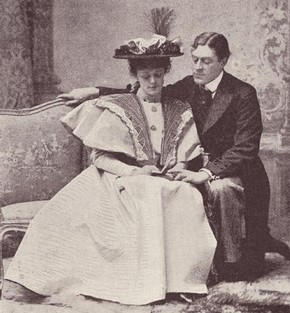 Irene Vanbrugh as Gwendolen Fairfax and George Alexander as Jack Worthing in the 1895 production of ‘The Importance of Being Earnest’, from The Sketch magazine, London, March 1895.

The Importance of Being Earnest premiered on St Valentine’s Day 1895 at the St James’s Theatre, London. It was Oscar Wilde’s fourth West End hit in only three years. His earlier play, An Ideal Husband had only opened a month before and was still playing to packed houses at the Haymarket Theatre a few streets away.

The first night was a glittering occasion, with audiences in evening wear. Wilde himself was in attendance, wearing what one biographer called ‘the depth of fashion’ – his coat had a black velvet collar, he wore a green scarab ring on his finger and carried white gloves. The production was a huge success. Allan Aynesworth, who played Algernon Moncrieff said ‘I never remembered a greater triumph, the audience rose to their seats and cheered and cheered again’.

At the final curtain, Wilde was called for but he refused to take a bow. He was avoiding the Marquess of Queensberry, the father of Lord Alfred Douglas. Wilde had issued a libel charge to the Marquess because he had implied that Wilde was conducting an illicit relationship with his son. At the time, homosexuality was regarded as a serious criminal offence.

However, on 5 April 1895, Wilde was arrested on a charge of gross indecency. On 6 April his name was removed from the programme and all advertising for the play. The box office collapsed immediately and the play closed on 8 May, having run for 83 performances.

Lough Gill Players will be The Importance of Being Earnest the 11th and the 12th of April at 8.30pm. Book tickets here!