Folkloric tales of lake monsters, recent archaeological finds and the opportunity of panoramic views of the Sligo and Donegal coastlines will enchant the walker at the North Leitrim Glens Hill Walking festival this Easter in the stunning Glenade valley Sat 31st March and April 1st. The festival run by the Holey Soles Hillwalking Club will also see the inaugural walk of the Arroo Trail Head on Easter Sunday, made possible by the inspirational co-operation between landowners and local agencies for the benefit of the general public. A special festival evening event in the Glens Centre Manorhamilton will give the walkers and the public a chance to wind down with a film by documentary maker Michael Brown.

Now in its 25th year, the North Leitrim Glens Hill Walking Festival will be exploring Glenade, or the “Jealous valley” as its known in local folklore. Steeped in history the Glenade valley can boast a series of firsts.
According to Jim Mc Morrow one of the organisers of the festival, “You’ll get to see one of the finest examples of a glaciated valley in Europe” in Glenade. Jim was bitten by the walking bug when he made a decision to hang up his football boots feeling as he says “too old for football” Looking around he chose walking to fill that gap for much needed exercise and has been involved in the festival from the beginning. Now 25 years later he’s never looked back and the festival has been going from strength to strength with record numbers last year. Jim is drawn this year by how “off the beaten track the walks are ” with scenery, which he says, is “absolutely fantastic”. The dramas of the ‘sheer cliffs’ are a highlight for him on both days of the festival and will be something to be enjoyed by the keen hiker.

Its in Glenade’s landscape, you discover that some of the best preserved bones of Ireland’s last brown bears (dated 3,100 years old) were uncovered at Poll na mBear or Cave of the Bears in 1997. Because of the consistently cool temperatures of the caves, archaeologists were able to collect well-preserved evidence from the bear and cub’s bones found, and DNA now links these bears with modern polar bears. It was the first time that there was evidence to suggest that humans and bears could have co existed in history here. Human hunting may even have been responsible for the demise of the Irish bears according to a related BBC documentary. Walkers will hike above the caves where the bears were found during some of the walks. The bones can now be viewed having made their final resting place in the Marble Arch Caves Centre in County Fermanagh where they are displayed to the public.

It’s in this landscape that you also hear tales of a lake monster in the depths of Glenade Lake. Half otter and half dog, the Dobhar Chu might be considered as Ireland’s own Lough Ness monster. The creature is said to have attacked and killed a local woman called Grainne Connolly in 1720. Her husband, Terence, on killing the beast for its actions woke the Dobhar Chu’s mate who gave chase to him across the valley until he managed to kill it under Benbulben. It’s a story that a song was written and sung about until recently at the Kinlough markets. It’s a story made more chilling by the fact that a gravestone in the local graveyard of Conwall features a carving of the Dobhar Chu on a headstone.

It’s without doubt that Glenade is a unique place. Recreation Officer for Sligo and Leitrim, Deirdre Kennedy reiterates how special Glenade is, for its folklore, its wildlife and its people. She proudly shares how the local landowners, Leitrim Co Council, Leitrim Development Company, Leitrim Recreation Forum and the Recreation Officer have been working in partnership for a period of time to create the Arroo trail. The inaugural
Arroo walk is on as the Sunday ramble of the hill walking Festival. It’s a family friendly event, the trail “is very accessible for families” she says.
The Arroo trail climbs early to 244 metres and treats people to panoramic views very quickly. In a Special Area of Conservation there’s evidence in the landscape of rare flora and fauna. And if you keep an eye out above you might spot buzzards and hen harriers or catch a glimpse of the elusive red grouse in the heather.
Deirdre is excited that the general public will now be able to witness what she describes as “stunning views” and is proud of the collaborative work that made that possible. She says she’s been “delighted to have the opportunity to collaborate with Leitrim County Council, Leitrim Development Company the landowners and local community to develop the amenity at Arroo”
She singles out local landowners and the community for particular praise as being instrumental in making the trail happen and sharing such a special place with the public acknowledging ‘the good will of the landowners for allowing permissive access so the public can experience this beautiful area for themselves” 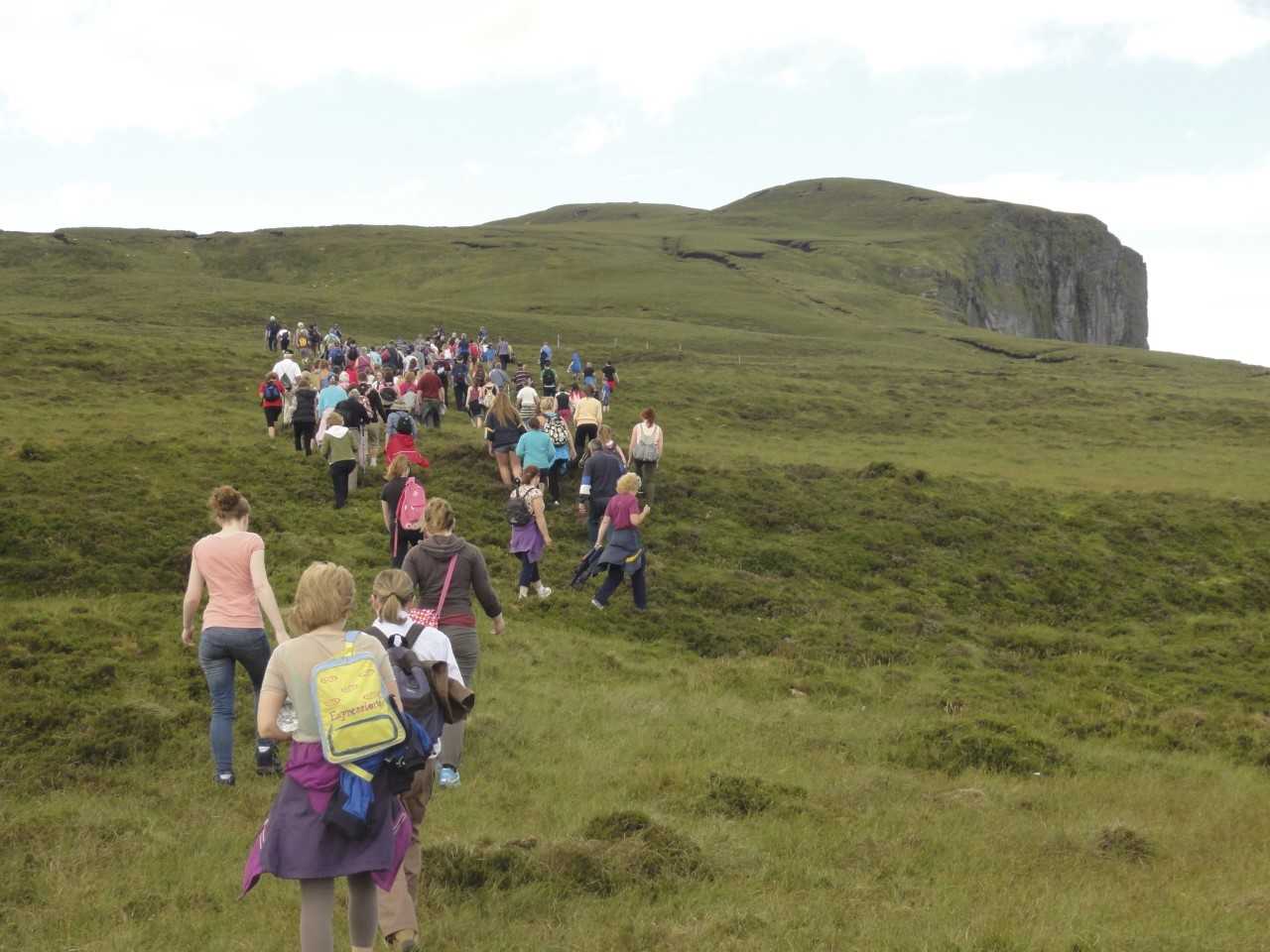 She sees the Arroo trail as a real addition to the tourism infrastructure of the North West and as a “great asset for walking tourism in the region”. It is now listed as a national trail route.

On Saturday March 31st walkers can unwind at a film organized by the festival at the Glens Centre Manorhamilton. The documentary chronicles the tough and interesting life of the working mule in Nepal. The Documentary maker Michael Brown will be on hand hosting a Questions and Answers session for the crowd after the film.

The festival would like to remind walkers wishing to take part that a Leave No Trace policy is in operation and that no dogs are allowed on the walks. Walkers are also advised to park at the car park provided at Aghanlish Community Centre to avoid impeding landowner access.

This site uses Akismet to reduce spam. Learn how your comment data is processed.