2018 is Beezneez Theatre Company’s twenty first year of touring and during that time they have undertaken thirty eight national tours. Their artistic Director, John McDwyer. has directed some wonderful productions in that time, including The Weir, Tuesdays with Morrie, The Kings of the Kilburn high Road, An Ordinary Man as well as his famous Leitrim trilogy of Lovely Leitrim, Callaghan’s Place and Unforgiven. So, when he says that The Drawer Boy is probably the loveliest play he has ever worked on, it’s time to sit up and take notice.

Written by Michael Healey and set on a remote Canadian farm, in its premiere year, The Drawer Boy won every theatrical award available to it in Canada and Beezneez bring the first Irish touring production of the play to The Glens Centre, where their work has become hugely popular over the years.

The Drawer Boy replays the adventures of a young actor from a Toronto theatre group who visits the rural Ontario home of two elderly bachelor farmers to “research” farm life for a new play. In doing so, he demonstrates the way in which a collective creation appropriated the lives of its subjects and changed their own interpretation of it. The two farmers, Morgan and Angus, have achieved a precarious balance in their lives together. Morgan, a tough-minded, stubborn man, cares for Angus, who has had brain damage and lost his memory during the bombing of London in the Second World War. Angus is initially identified as “the drawer boy” because he used to design buildings, and has the talents of an architect. Morgan calms and reassures Angus by retelling their story – of the two tall women whom they loved, and who came to live with them in Canada. The young actor, Miles, learns, however, that this story is a fiction, and that the truth is much sadder. It would, in fact, destroy their friendship. In the process of telling their story as play, however, he reawakens Angus’s memory. Art becomes life. Miles is in effect the “drawer boy,” delineating and creating an alternative reality. As he tells Morgan, “We’re here to get your history and give it back to you.” The Drawer Boy is fundamentally about the power of storytelling in creating and interpreting reality, and how it can transform lives. 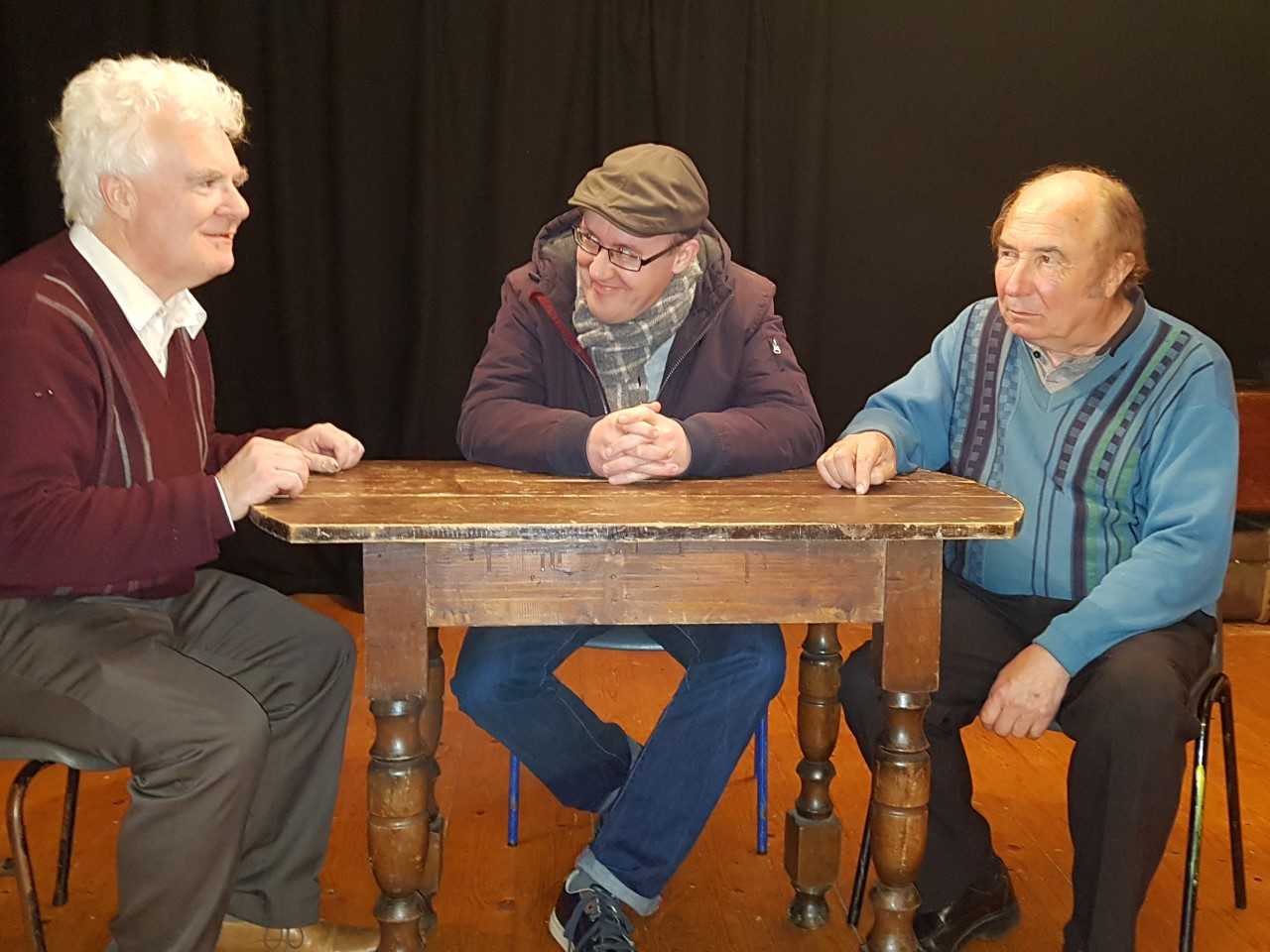 Gerry Farrell, Wayne O’Connor and Michael Roper in Beezneez production of The Drawer Boy which plays in The Glens Centre, Manorhamilton on Thursday 15th Feb.

The London premiere of the play, presented by Snapdragon Productions at the Finborough Theatre, was praised by the critics. The Guardian called the play “a landmark in Canadian theatre”, and The Stage praised the play as a “modern classic in the making”. In her five-star review for WhatsOnStage.com, Amy Stow praised the production as “delicately and sympathetically approached by director Eleanor Rhode, who skilfully draws out the humour within each relationship, and creates an immersive world which the audience can simple sink into.”

John McDwyer was well aware that only top notch actors could catch the nuances in this wonderful script so the parts are played by Gerry Farrell, Michael Roper and Wayne O’Connor. Gerry Farrell is renowned for his interpretation of Cullen in McDwyer’s masterpiece An Ordinary Man and Michael Roper has worked extensively with Beezneez in The Leitrim Trilogy, The Kings of the Kilburn High Road, The Weir and Tuesdays with Morrie. While Wayne O’Connor may be a Beezneez newcomer, he has worked extensively with theatre companies in Sligo.

The Drawer Boy promises to be an evening of laughter and tears as this funny and moving play reveals itself and this production falls easily into the unmissable category.