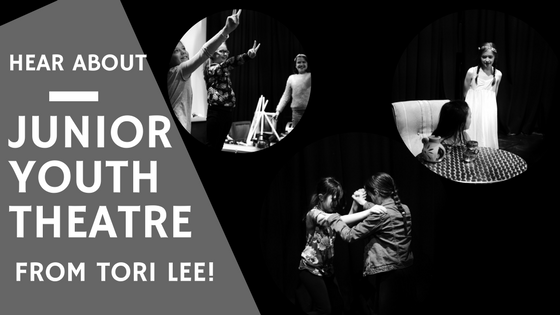 Tori Lee is a drama facilitator for young people, an actor and playwright.

I have been fortunate to run the Junior Youth Theatre, here at The Glens Centre, since October 2015. My choice of the word ‘Fortunate’ is very carefully chosen here. The present and past members of the Youth Theatre, I have encountered, have brought with them an energy, an inquisitiveness, a passion for performance and comradeship that has been joyous to watch positively spring on to stage and to grow amongst the members. I know most of them keep in touch out of the classes and strong friendships have been formed.

We meet, during the blocks of classes, on a Saturday for an hour and a half from 1pm-2.30pm. Firstly we hear each other’s news (always an important part) warm up, learn acting techniques, work a lot with improvisation and creating new work and play a couple of drama games. I say ‘We’ as I often learn a great deal myself, through the members, as I hope they do from me and Katie Lynch my assistant.

I love when they bring ideas to the class, problem solve staging issues and feel confident enough, within the group to voice their opinions as well as give each other suggestions. During the run up to our last performance, where they were performing a series of duologues. Myself and Katie encouraged everyone to give feedback, positively, on each duologue that was being rehearsed. It is an important part in life, as much as anything, to both give and receive feedback in a gracious manner and I was immensely proud with how they perceived each other’s work, encouraged, supported and advised each other and in response listened and took on board what everyone had had to say.

Live theatre can also be a good lesson in working around problems, using initiative, working strongly as a team as well as taking on leadership roles. During another performance, last year, we used a lot of mixed media. As we started the performance, we had a technical hiccup resulting in the group having no cues to work from and no background to respond too. I was incredibly proud with how they just got on with it, prepared to just go out there and perform. Fortunately, the hiccup was solved and they returned to the stage once more to perform the pieces that they had, for the most part created themselves.

During 2016 Junior Youth Theatre performed twice on the stage in The Glens Centre. They performed pieces that they had created themselves and directed themselves, as well as work by others.

I love working with Junior Youth Theatre, they’re energy is infectious, we laugh, create and perform together. It is a joy to see the creativity they bring to the class.

Feedback from our Youth Theatre goers!

I like Drama because you make new friends, that you can be yourself, show different emotions and get to be in plays –  Amy Gallagher aged 9yrs

I really enjoy drama because I can show who I really am there and not feel weird or nervous about it. I also love how, when I am there it is not just work, work, work, or script, script, script, there is time for fun too. I love the people there too, I feel like I have made true friends there –  Shaúna McDonnell aged 11 yrs

Great for socialising, I have more confidence and it has helped me with my drama skills. It is a lot of fun –  Miniver Lee-McLoughlin aged 11 yrs

I thought Drama was a great experience and that anyone should try it. I thought it was a great way to make friends and have a good time –  Bronwyn Kirwan aged 13 yrs.

When I was about to go to drama I was pretty scared, but when I arrived they accepted me like I was a part of their family. I loved the way we spoke and acted, I felt happiness when I walked in the door every time. It was a really great time. –  Coré, aged 10