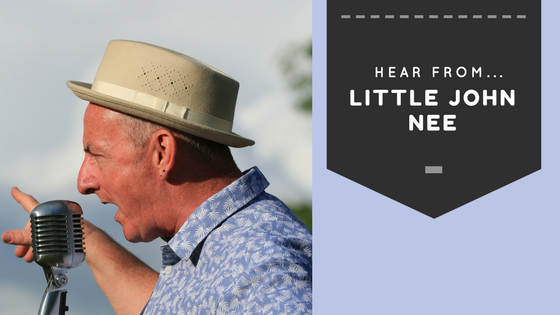 John Nee is an Irish storyteller, actor, musician and playwright who is more commonly known by his stage name Little John Nee.

I am fierce fond of travelling around this beautiful exotic island. My first national theatre tour was 1983 with The Grapevine Touring Co. in an old yellow Volkeswagon van. It was a kids show called “The Time Cupboard”. The object in the title was strapped to the roof. When told the object strapped to the roof was a Time Cupboard for time travel the British Army insisted on climbing on top and searching it. I’ll never forget the look of disappointment on their little faces. The halls and the potholes have improved since then. I first played in the Glens with The Derry Boat around the start of this century.

Small Halls and Potholes is my show designed to allow me to gallivant to my hearts delight. In the winter of 2016 I brought it to five European cities in the days following Donald Trump’s election and he featured bigly every night. They are mad for stories about the idiosyncrasies of modern rural Ireland in the old cities of Europe. It’s an evening of fun. Very much responding to the day that’s in it, the venue and most crucially the audience and as much fun as we can make of it. I used fun twice there. I could have used a thesaurus but to tell you the truth “fun” is the word. I play my favourite songs and tell my favourite stories and inevitably we go into some experimental jazz improvisation. I say “we” I mean you and me. Some punky, retro, harlem renaissance, post apocalyptic seanchie experimental jazz improvisation. Because we’re all only passing through.

It’s not plámás when I say the Glens is one of my favourite venues. It is. I’m sure you can appreciate why. My show Dead Rooster Blues premiered in Killargue so the song has it’s origins there and there are a clatter of haikus in “The Apocalypse came on a Friday” that are based locally. I suppose what i’m trying to say is that i’m really looking forward to spending a summer’s evening in the Glens and it’ll be more fun if you’re there.

Birds loud in every bush

Little John Nee will be performing in The Glens Centre on the 23 June at 8.30pm.